The Complete History of Paintball

The paintball we know and love today is a relatively recent extreme sport. The history of paintball begins back in the 1960s. Nelson Paint Company crafted balls of paint in gelatin shells — the first paintballs. They contracted out custom CO2 pistols for firing the paintballs. Originally, paintballs were used for marking things like livestock or trees from a distance, or from a vehicle. This is why today paintball guns are still called paintball markers!

Later in the 1970s some friends over drinks, Hayes Noel and Charles Gains, started discussing the survivability of city-dwellers in the woods. How far will survival instincts take you? How does that stack up against the learned behavior and experience of an outdoorsman? Having heard about the Nel-Spot 007 paintball marker, they decided to make a game of it. Their friend Bob Gurnsey created the rules for the first paintball game.

Although talk of this new survival game began in the late 1970s the first game didn’t take place until 1981 (Henniker, New Hampshire USA). Prior to the actual game they had to purchase a Nel-Spot 007 and test it to make sure it was safe to fire at humans. Shelby Gaines took one for the team and decreed that “It didn’t hurt much!” From there, they were ready to get a group of people together and try their new survival game!

The group grew from the original three to 12 for the inaugural game. The nine new players each paid $175 to join, which covered the cost of equipment, food, and drink. June 27, 1981 was selected for the first game. Each player wielded a Nel-Spot 007. The field was near Charles Gaines’s home. Of the 12 players, six were hunters, and the other six were of various other professions including a forester, surgeon, writers, a farmer, and a stock broker. The general consensus was that the hunters would have a significant advantage, and fare much better than the other players in their game.

The first game was played in an 80-acre cross-country ski field. They set up four flag stations with 12 flags each. The winner would be whoever captured all four of their flags first. As a bit of a handicap for the city folk, who it was supposed might have trouble with maps and get lost, they stationed a referee who would blow a whistle every 15 minutes. At the end of the game, the forester Ritchie White emerged victorious! The first ever winner of paintball. Like a total badass he stealthed his way through the whole game and didn’t fire a single shot. There is a sign on this playing field outside of Sutton, NH commemorating the first game of paintball ever played.

Bob Jones helped get the word out for their National Survival Game (or NSG as they then called it) by penning articles in the October 1981 edition of Sports Illustrated. People immediately reacted, wanting information on how to play. Gurnsey, Noel, and Gaines saw the commercial opportunity they had and began selling starter kits. The kits included a Nel-Spot 007 and paintballs, safety equipment like goggles and a compass, and their NSG rulebook.

In 1982 Bob Gurnsey opened the first commercial paintball field in New Hampshire. He created the brand National Survival Game and made a contract with Nelson Paint, becoming the sole distributor of the Nelson Paint paintball products. Gurnsey then began licensing out the NSG franchise to others who wanted to start their own fields. After some months two players, Jeff Perlmutter and David Freeman, wanted to get into the business. However, they were unable to make a contract with NSG. So they started their own business instead. Their company was called Pursuit Marketing Incorporated (PMI). They contracted Benjamin Sheridan to create a new marker: the brass-bodied Pursuit Gun Pistol (PG Pistol). They got their own paintballs made, as well. PMI only distributed to fields and retailers, rather than direct to consumers. With the creation of PMI, there was now competition for NSG. This was the beginning of the paintball industry.

1983 was quite a busy year for the budding sport of paintball. The first ever NSG National Championship tournament was held. The very first tournament winners in the history of paintball were The Unknown Rebels, a team hailing from Ontario, Canada. With the sport barely two years old players were not beginning to modify their markers. This made them illegal in sanctioned tournaments, but took casual games to a new level. Pump handles, barrel and magazine extensions, and gravity feeds started being seen in games.

The following year new markers were released by both NSG and PMI. NSG released the original SplatMaster model. It was the first marker designed for the sport, rather than being modified from from an existing pellet gun. PMI added a pump handle to their Pursuit Gun, calling this new model the Pursuit Gun Pump (PGP). 1984 was also when the sport transitioned from being called the National Survival Game to being called paintball. Paintballs themselves were now made with water-based paint instead of oil, for significantly easier cleanup. Paintball also started to make its way overseas to England and Australia.

In 1987-1988 Dennis Tippman Sr. was forced to abandon his business of half-scale machine gun replicas because of new firearms laws. So he decided to switch to the paintball industry with Tippman Pneumatics, and released the first fully-automatic paintball gun: the Tippman SMG-60. Not long after that he released a semi-auto mode to make it tournament legal. Tippmann also re-engineered pin valves from the soda industry to create the soon-to-be-standard pin valve paintball CO2 tanks.

In these early years tons of new brands and products popped up. From Worr Games Products, with their Sniper Pump paintball markers, to Palmer’s Pursuit Shop with custom Sheridan-based modifications and markers, to JT USA, an off-road motorcycle sports company, with the first JT Goggles, modified from their motocross goggle. The comfortable JT Goggle marked the beginning of the paintball goggle industry, and revolutionized safety in paintball. More armor and safety gear began cropping up not long after, with JT USA at the head.

With these new burgeoning industries paintball began to be standardized, stepping away from homebrew creative solutions with regards to gear. Barrel plugs were first introduced in 1987, and were soon a standard requirement. Paintball grenades appeared on the market with the Bouncing Betty by Pro-Star Labs. The Los Angeles Paintball Company (LAPCO) developed and released the first Bottomline Air Source Adapter (Bottomline ASA), revolutionizing paintball marker design by eliminating mask interference when players shoulder their tank. 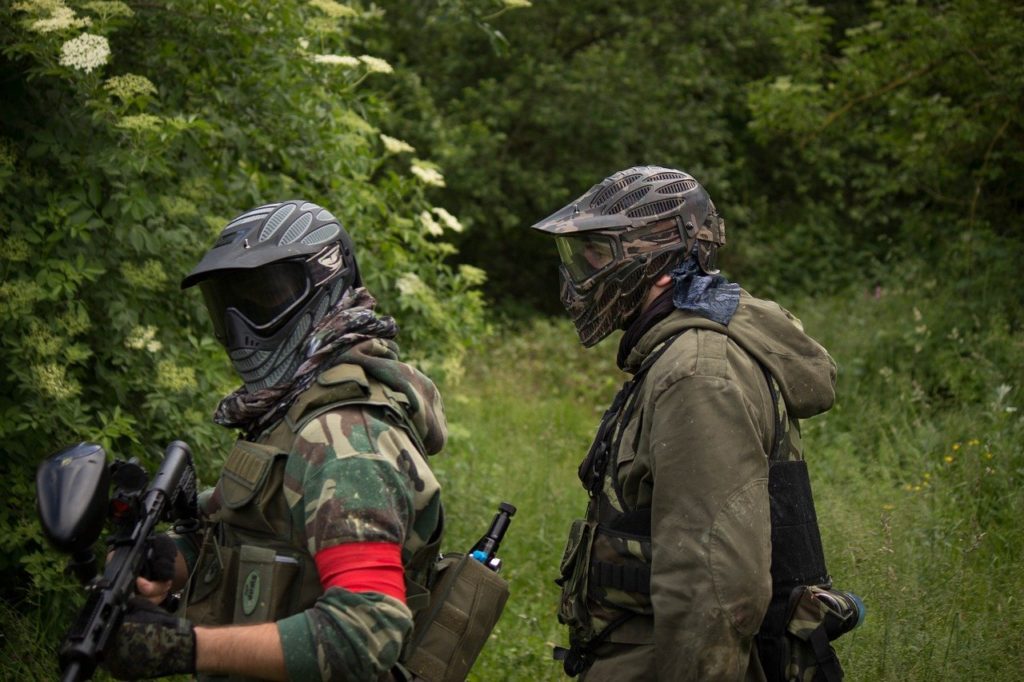 In 1989 a large paintball park in southern California opened the first Speedball arena. This set the stage for standardized competitive arenas. Speedball engendered fast, furious, and focused games, a drastic difference from the first game in 1981, only eight years earlier.

The 90s saw a rise in semi-automatic markers, as well as the first gravity hopper fed paintball markers to be mass produced. Paintball also began to spread farther across Europe, and started to gain a more positive and safe reputation. The first compressed air tanks also hit the market for paintball, but were not immediately tournament legal. The National Paintball Players League formed at this time as well, and hosted its first paintball tournament. The NPPL was instrumental in broadening the competitive scene for paintball, creating both pro and amateur divisions.

Kingman International made a waves with the release of their first Spyder Paintball Gun. Thanks to its aluminum body it was a much lighter weight than other semi-auto markers on the market. It was mass produced, so easy to find, and significantly more affordable than other semi-auto markers on the market. Its release was a major blessing for paintball players on a budget. The Spyder Paintball Gun brought players who couldn’t afford the most expensive markers up to similar firepower as the best markers. It greatly evened the playing field.

In 1995 ESPN broadcast the World Cup. This was the first time that a major network ever broadcast paintball. Unfortunately, due to legal issues revolving around the use of silencers, thanks to paintball markers held to the same laws as firearms, the tournament was not very TV-friendly or fun to watch. It was not successful.

In 2001 the NPPL placed a ban on barrel plugs at paintball events. Instead they began to require barrel covers. This eventually led to barrel covers becoming the international standard for barrel blocking devices.

In 2002 at the World Cup the infamous “Sniper Incident” took place. A team member who was not playing in the tournament match hid outside the field boundary and attempted to eliminate opposing players. Probably one of the worst cases of cheating to have occured in the history of paintball on the competitive level.

Throughout the 2000s a lot of official work such as patenting went on. Many companies were bought out, and some legal disputes occurred involving various patents. Paintball at this point is a fully commercialized industry in the hand of capitalism. There was for the first time a push for .50 caliber markers, but it was unsuccessful.

However, within two years the .50 caliber debate re-heated. While competitive players were firmly against it as the standard, a market emerged for younger players and family recreation. This began the Low Impact version of paintball, and opened up the extreme sport to an even wider audience. 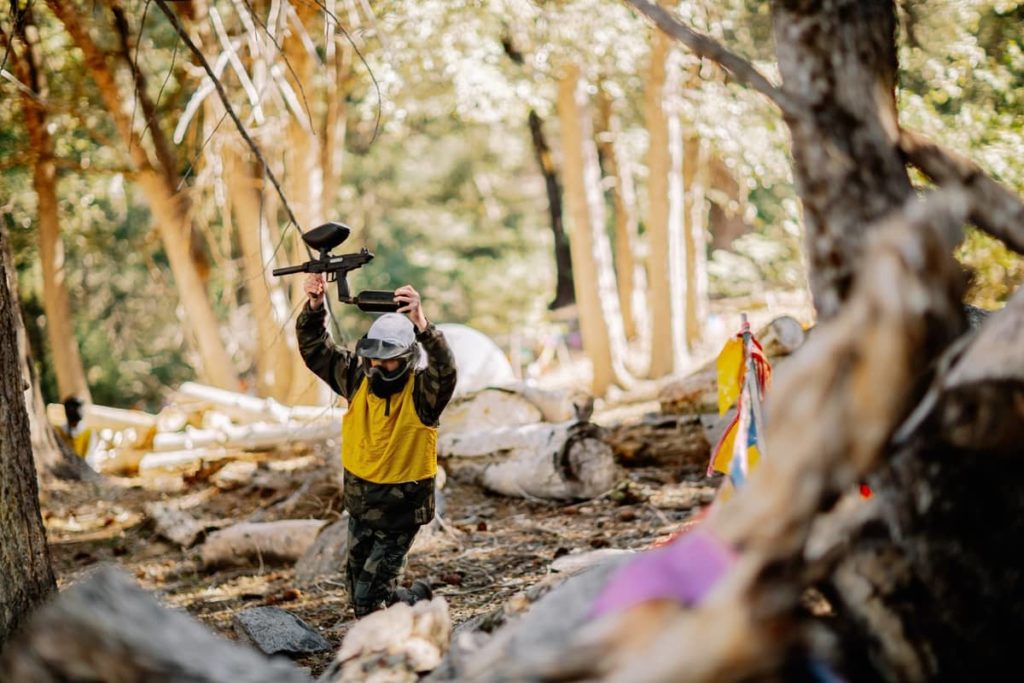 Nowadays, paintball is a multimillion-dollar industry with a wide range of gear available on the market. The paintball venues now range from regular forests to WWII-themed locations for those wishing to play this fantastic game. The rich history of paintball created different game formats from “elimination” to “capture the flag”.

People play paintball as a competitive sport, a team-building game, a birthday party, or simply for fun. Whether you are a beginner or a professional paintballer, you can always enjoy this game and be a part of its history.

In the last few years themed games and special events tying in to pop culture such as the zombie apocalypse have emerged. Paintball has become a huge phenomenon and one of the safest extreme sports in less than three decades. We can’t wait to see what comes next.